An ASALH Regional Branch Meeting will be held on Saturday, November 9, 2019, in Washington, DC at the 19th Street Baptist Church, Location: 4606 16th Street N. W., Washington, D.C. 20011, hosted by the Bethel Dukes Branch of ASALH, President Dr. Ida Jones and members of the Bethel Dukes Branch.  Branches in DC, Maryland and Virginia and any other branch members or individuals interested in establishing a branch are invited to attend.

The event is free and open to members, but registration is requested by November 1.

Please RSVP by November 1, 2019 to vpformembership2019@asalh.org 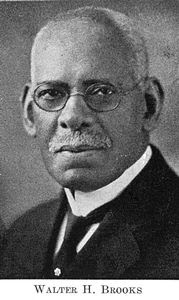 The Nineteenth Street Baptist Church, located on 16th Street, NW, is considered to be the first and oldest black Baptist congregation in Washington, D.C. Since its founding in 1839, the church has figured prominently within the historical and social fabric of Washington, DC’s African American community.  They celebrate their 180th Anniversary this year and welcome ASALH as its guest.

Reverend Dr. Walter Henderson Brooks, the grandfather of our esteemed President, Evelyn Brooks Higginbotham, was installed as the pastor of Nineteenth Street Baptist Church on November 12, 1882, —then referred to as the Dean of ministers. Under Brooks’ pastorate, which spanned over sixty years, the church membership grew to over 3,500 and attracted leaders of the African American community. The church became one of the nation’s leading Baptist congregations and wielded considerable influence.

Walter Henderson Brooks had already established a reputation as an advocate for education, racial equality, and temperance. Born a slave in Richmond, Virginia to Albert Royal Brooks and Lucy Goode Brooks, Brooks graduated from Lincoln University (Pennsylvania) where he studied with fellow contemporaries, Archibald and Francis Grimke’. Brooks’ wife, Evalin “Eva” Holmes Brooks, was the daughter of Reverend James Henry Holmes who served as pastor of the renowned First African Baptist Church of Richmond, Virginia. Brooks advocated for the inclusion of liberal arts courses within the curricula of black Baptist colleges, like those found at Howard and Fisk universities.[12] Brooks was among the black ministers and churchwomen who called for the inclusion of writings by black theologians within the American Baptist Publication Society’s literature. In addition to influencing the establishment of both the National Baptist Publishing Board and the National Baptist Convention, U.S.A., Walter Henderson Brooks also served as vice-president of the Bethel Literary and Historical Society under John W. Cromwell and was a member of the Association for the Study of African American Life and History.[4] He also received honorary Doctorates of Divinity from Howard University, Roger Williams University in Nashville, Tennessee, and the State University in Louisville, Kentucky.

Please register on the form below by November 1.